You trainhop aboard the Silver Ferryman, chasin’ a dream or runnin’ from the past. What you find is a welcomin’ hand - white glove, stretched skin… and a fiddle player in the distance, playin’ a tune that’s awfully inviting. Makes you never wanna leave.

Haven't had a night's rest since you don't know when,
There's a whistlin' from a train comin' 'round the bend,
Out from the darkness, its haint blue light descends
Hop on board as it passes by - it'll be your bitter end

In Vagrantsong, a cooperative and story-driven boss battler, you will take on the role of a Vagrant trapped on a supernatural ghost train. Face off against ghosts lingering on the train (called Haints), adjust your playstyle with Skills and Junk acquired along the way, and uncover the secrets of the Silver Ferryman in this spooky and challenging adventure. 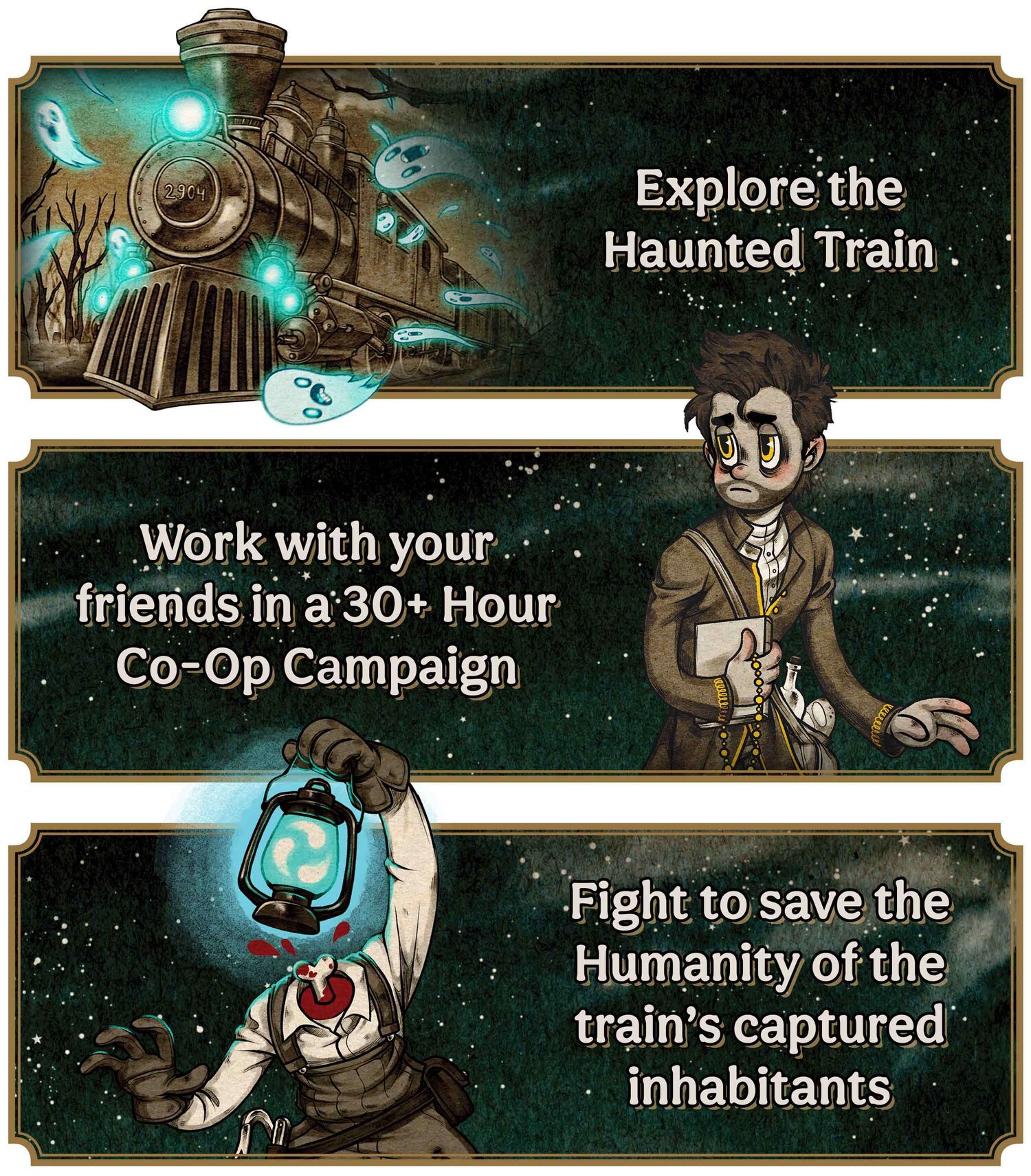 In each of the 20+ Scenarios in Vagrantsong’s campaign, players will take turns spending their 3 Coins to take actions, such as: moving around the train board, investigating the unknown, and rummaging for items that might help them get out of a tight spot. Additionally, players can spend their Coins on more exclusive actions to remind a Haint of their lost Humanity, all in the hopes of freeing the spirit from the ghost train’s bone-chilling grip, and winning the Scenario in the process. But be careful! Each Haint has their own bag of tricks and gameplay mechanics. They will stop at nothing to make sure that the players lose all of their Humanity and stay aboard forever. 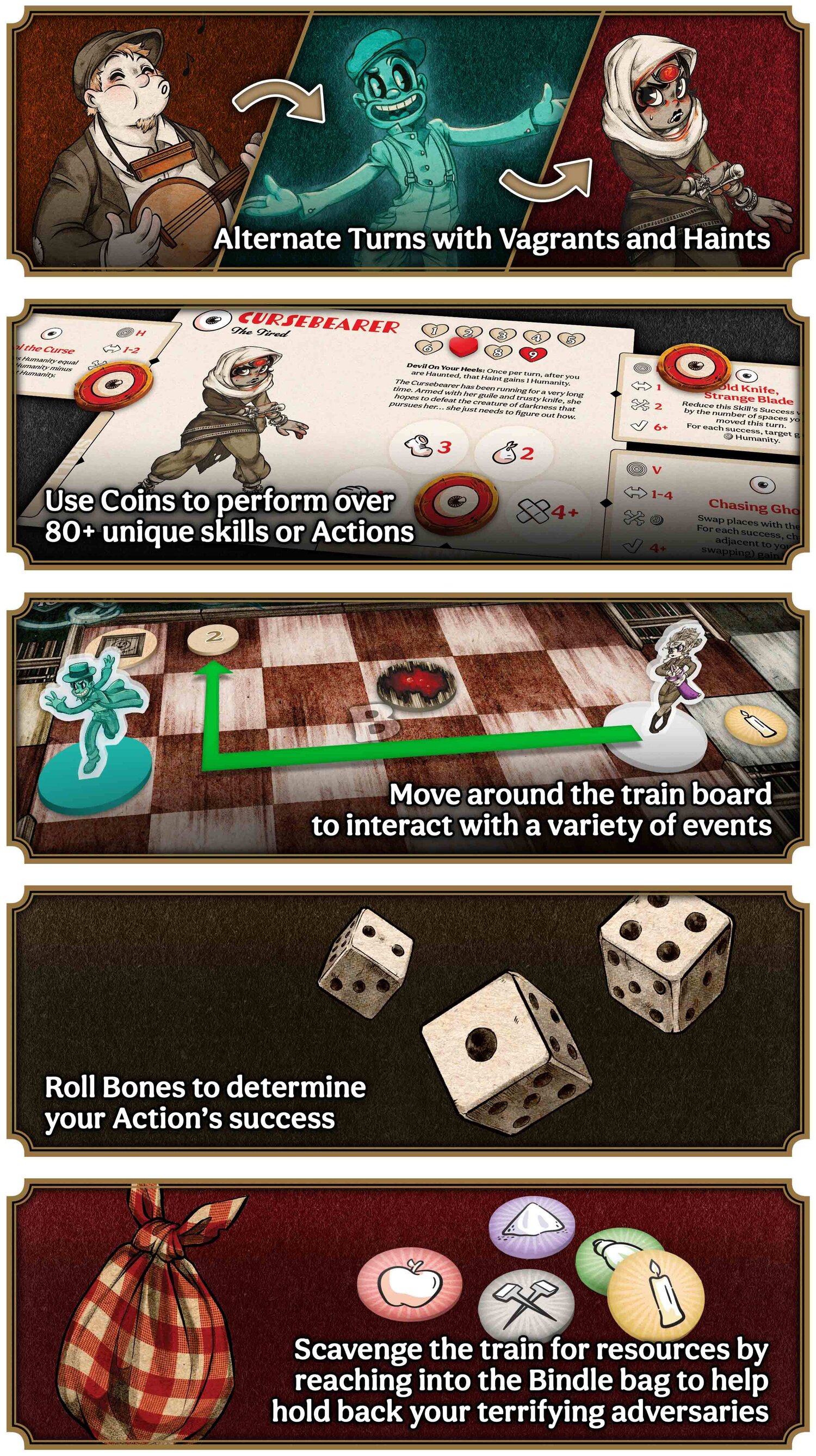 After each Vagrant turn, it’s time for the Haint to take theirs. The Vagrant who just took their turn will draw a Rummage Token from the Bindle and then perform the Haint’s Action based on its current Mood and the Rummage Token drawn. Then the Haint will Move toward the target priority (usually the Vagrant with the lowest Humanity) to strike them down! 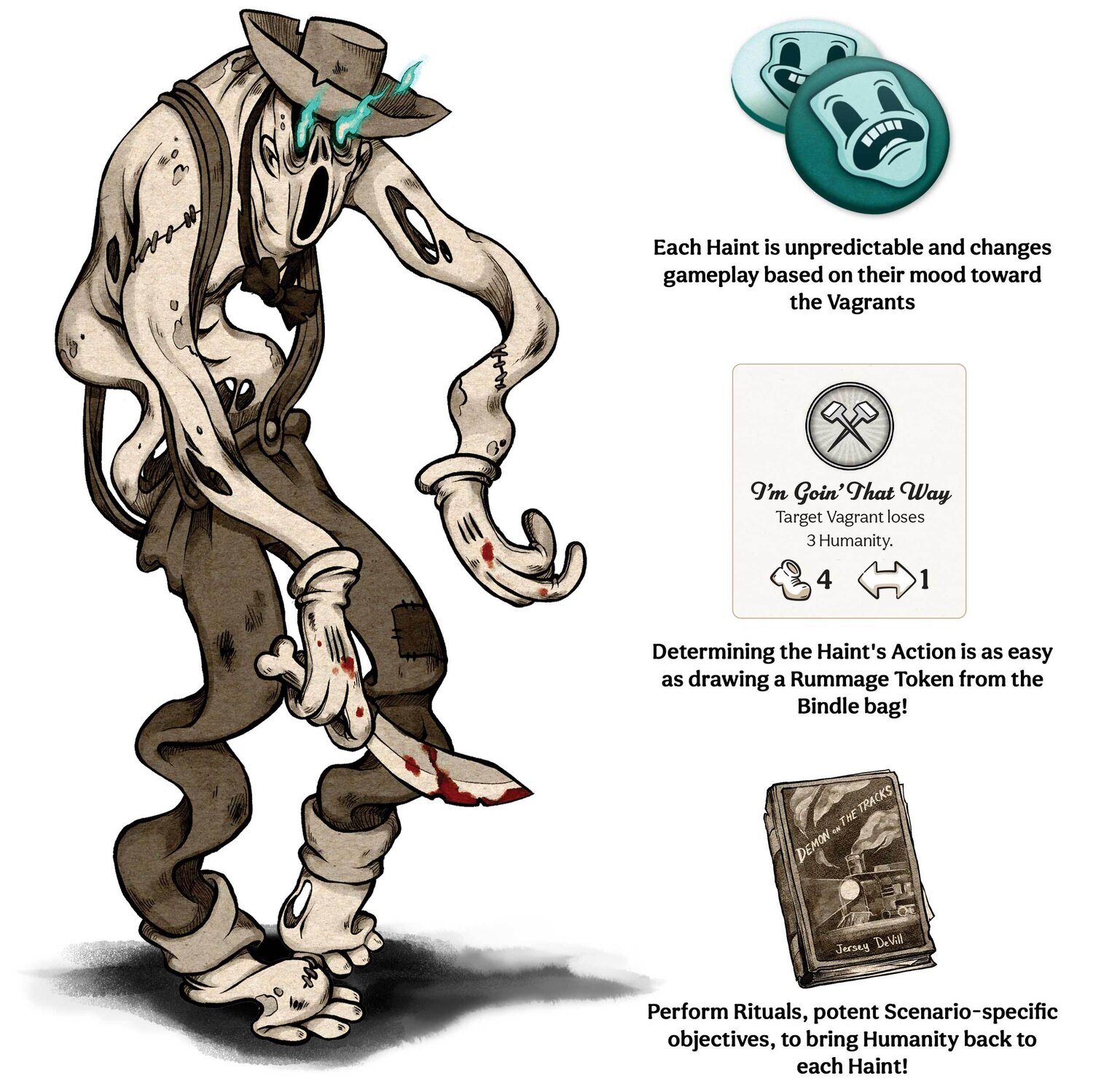 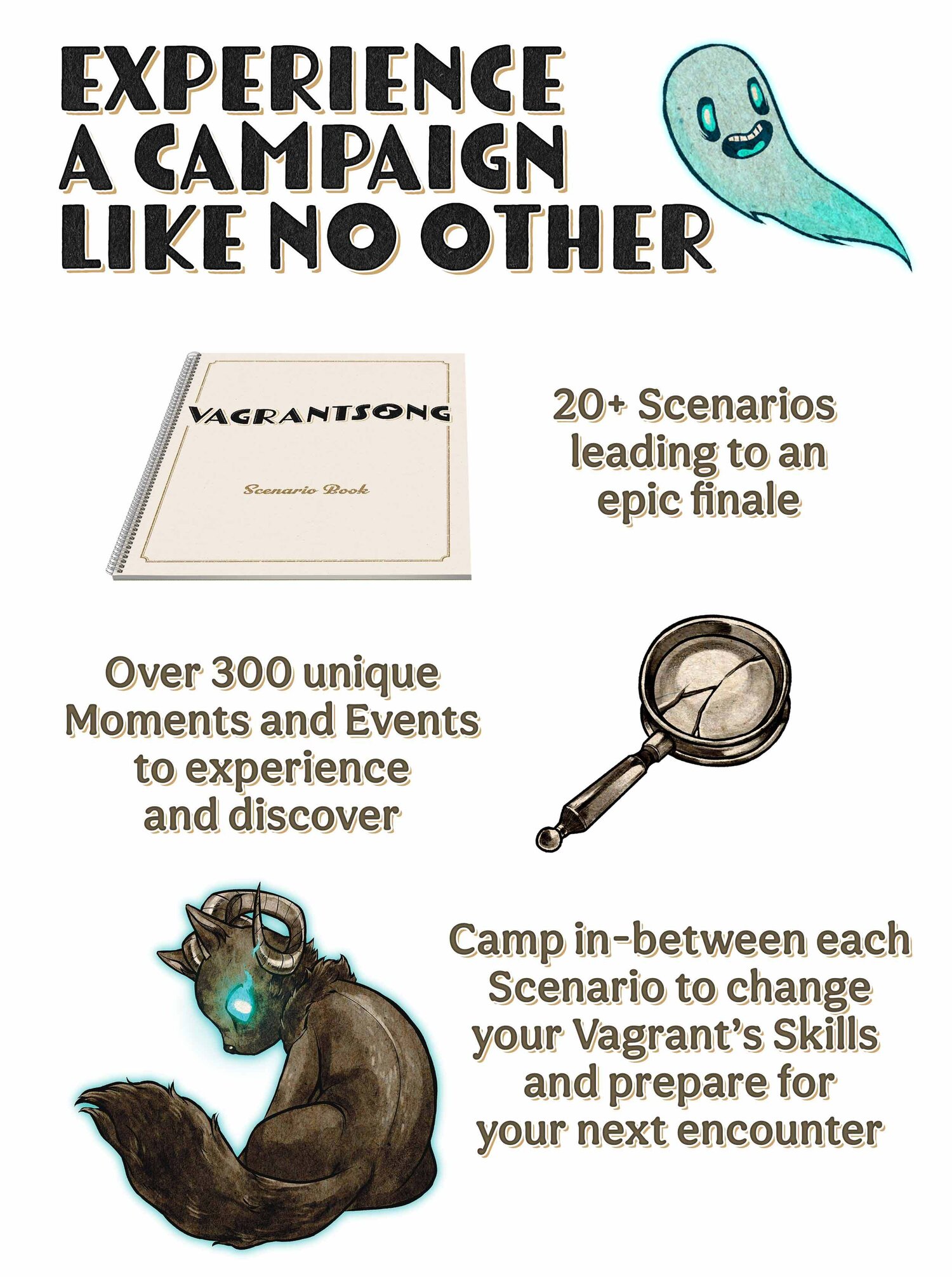 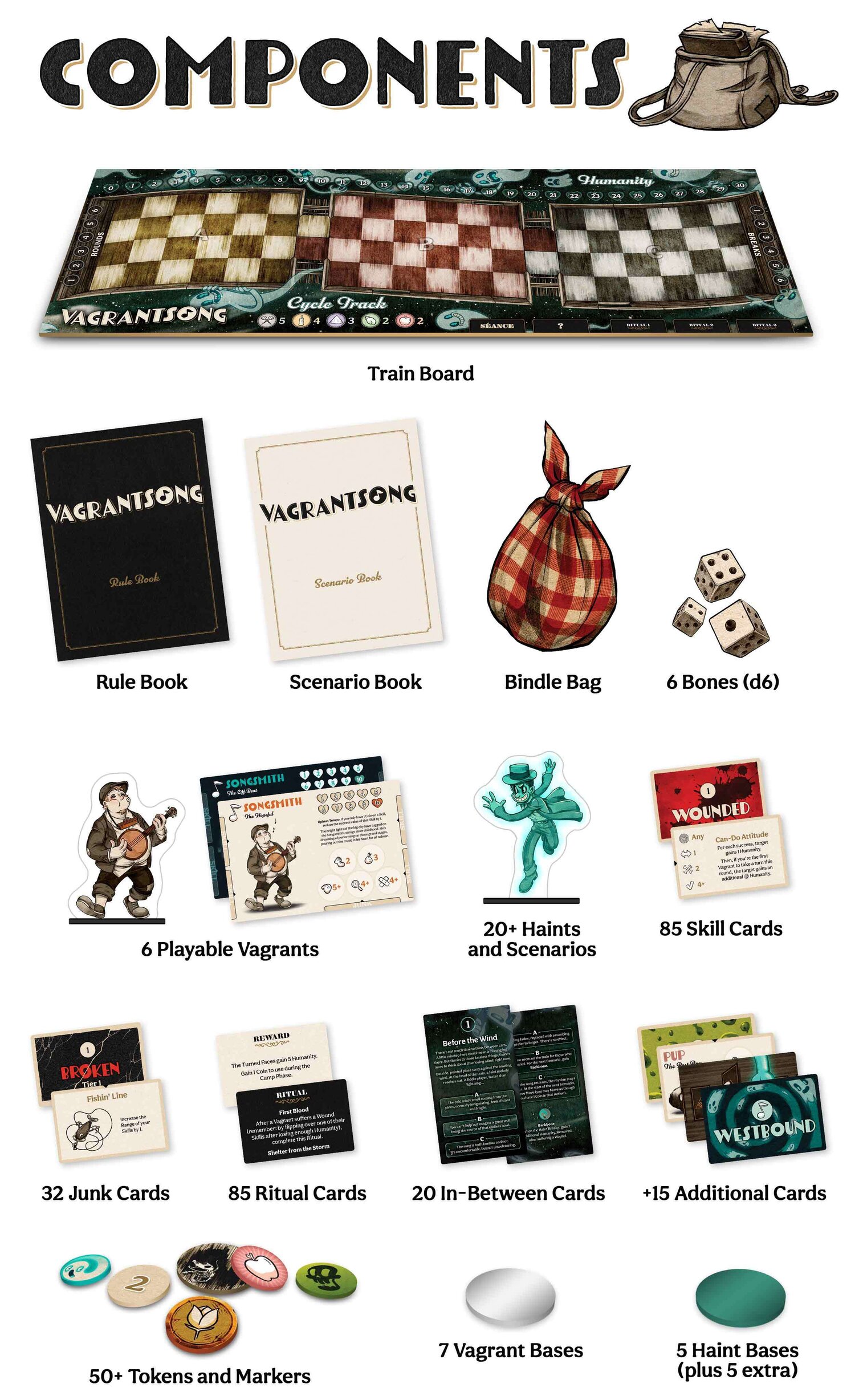 Will you and your Vagrant friends survive the twists, turns, and tribulations that await you aboard the Silver Ferryman? Can you find your way off this train while restoring the Humanity of those who have failed before you? Or will your souls be lost forever, infinitely drifting in-between worlds to the song of the fiddle player? The only way to find out is to play Vagrantsong when it is released at your local game stores soon!