"We lost our way and sailed into a nightmare. All our cargo was thrown overboard, and now we must save that precious cargo — as well as our captain! — and escape from the raging gigantic octopus from the deep." 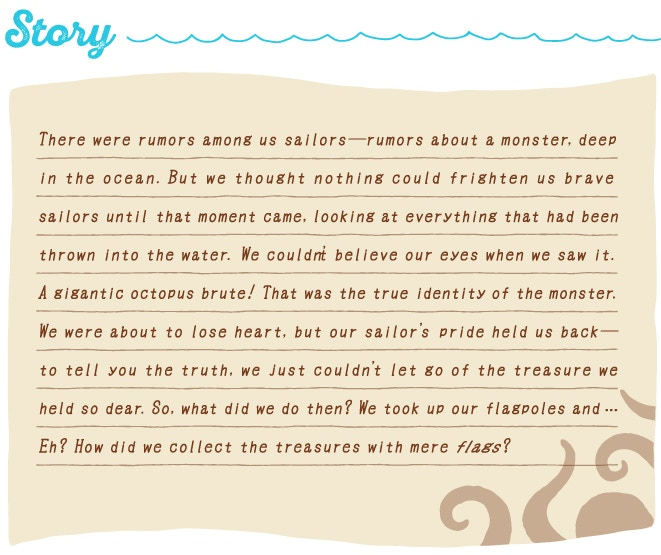 In Crash Octopus, players race to collect cargo that's floating in the ocean, while surrounded by a horrifically giant octopus. The first player who collects all five types of cargo on their ship wins.

On a turn, a player uses their flag to either navigate — by flicking the anchor next to their ship, then moving their ship to touch the anchor — or flick cargo. Cargo comes in five types — goblet, chest, gem, gold, and captain (yes, really!) — and you can flick any type of cargo that's not on your ship toward your ship. The only exception is that you can't flick the single cargo item closest to your ship. If the flicked cargo misses your ship, your turn ends; if it hits your ship, you load that cargo, then advance the cargo tracker, which is a string of beads on the perimeter.

If you advance a black bead on the cargo tracker, the octopus attacks! Each player takes a turn dropping a die and bouncing it off the octopus' head, possibly moving the head or a tentacle to get in the way of others picking up cargo and possibly knocking cargo off a ship. What a setback!

Contains a mini-game for practicing the basic skills of this game: collecting luggage and attacking octopus. You can also enjoy it in solo play.

Create even more 3Doodles with extra tips for your 3Doodler 2.0. The 3Doodler 2.0 nozzle set includes six new and exciting nozzles, each guaranteed...

Get The Create+ Learning Pack For Your Classroom The 3Doodler Create+ has proven to be a versatile and engaging tool for students ages 14+, of all ...

It is loaded with fun ideas and stencils to get your creativity started. You are able to doodle over stencils or other items and then peel them off...