Every player's Rondel is unique, every game!

In Tiny Epic Pirates you take control of a Pirate ship with the goal of burying vast amounts of wealth on secret island hideaways.

Each turn, you move your Captain Token around your ship’s action wheel, selecting which action to perform...

It isn't just other pirates standing in your way of burying treasures! The Royal Navy has their eye on you and the more notorious you become, the more eager they are to stopping your exploits.

An encounter with the Navy will surely slow your progress, so you best be avoiding them. To do so, you're going to need a good ship and a great crew!

There's a lot of scallywags out there looking for adventure! So assembling your crew won't be very hard, but pulling together a winning crew... that's a different story.

Your crew will play a major role in Tiny Epic Pirates. Each crew member brings different advantages to battle and to the actions you'll take.

The dice listed at the top of each crew card, and your captain's card, represent what number you'll need to roll to score a hit on another ship! Having multiples of a single number can result in lots of damage, but spreading your numbers out can result in more consistent results. The choice is yours!

The icons listed at the bottom of each crew card, and your captain's card, represent bonus actions that can chain together for epic turns! If the first icon matches your chosen action, you'll get to take the action of the second icon for free. 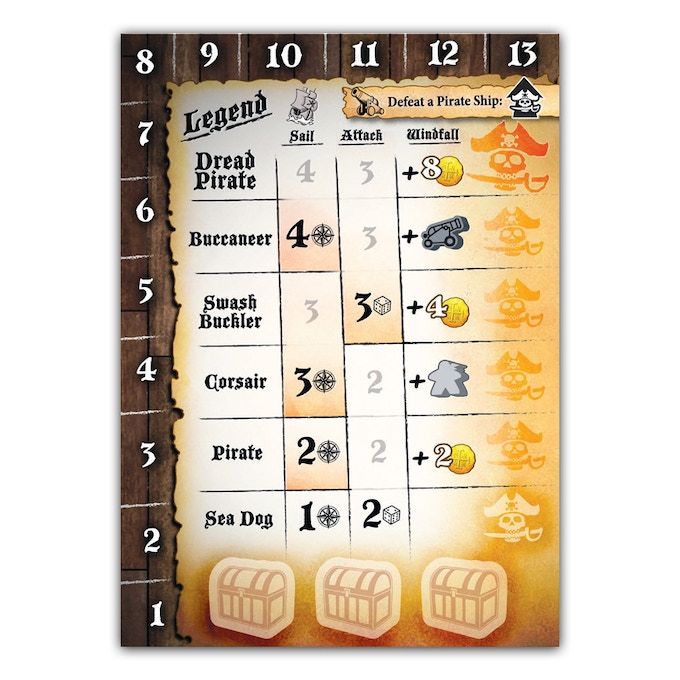 In addition to your crew, you'll have your reputation and your exploits. As you prove yourself in battle, your legend will grow and so will your ability to command your ship.

Winning battles against other pirates, and against notable merchants, will increase your Legend Level. Each new level offers immediate benefits, as well as increases to your ship's movement and the number of dice you roll in battle.

But enough talk, you're no landlubber. You can learn more about Tiny Epic Pirates by engaging with us in the comments, watching the videos below, or by downloading the rulebook below.