“Soulaween” is the most bustling festival at Death School!

The name derives from a proverb of the school, “Soul to win”, which means reaping souls to claim victory. Legend has it, that long ago at Death School there was an accident, causing souls to flee and disperse in chaos. The teachers and students took it as arace, competing the speed of recollecting souls, and solved the crisis of the realm of death. This year, Papa Death, Osiris, Hei & Bai Wuchang along with their trainees converge in “Soulaween”, with Teacher Vulture as their judge, are ready to engage in the rival of “reaping souls”……!

Soulaween is a 2-player board game that features simple yet tricky rules and variable player powers. During the game, each player acts as a trainee of the death god, whose goal is to reap the fleeing souls by “putting” and “flipping” the soul pieces. Whoever gets 3 sets of souls becomes the winner of “Soulaween”!

The game starts from whoever wears a sweater lately and proceeds in the following order:

1) Put
Take a Soul Piece from the supply and put it into an empty cell on the Mat. You can decide which side you’d like the Piece to face up. 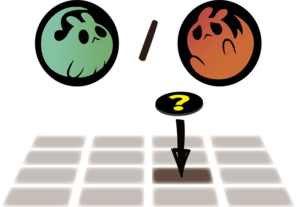 2) Flip (Soul Transformation)
Flip the Pieces that are adjacent (vertically and horizontally, but not diagonally) to the Piece you just put on the Mat. 3) Reap (Reaping Souls)
After “Flip”, if there’s a chain of 4 Pieces with the same side facing up (vertically, horizontally, or diagonally), remove the chain from the Mat and return the 4 Pieces back to the supply, and take 1 Token as a mark of having reaped 1 set of souls. 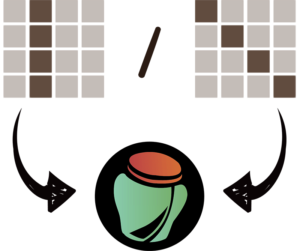 Players take turns and repeat the steps above. Whoever collect 3 Tokens ahead wins the game!

Sounds easy, right? However, in order to win the game, you might find yourself doing a lot of abstract and strategic thinking! In addition, there are 3 characters to choose from, each with unique power, making the game even more tricky!