Humans, Elves, and Dwarves have stolen our lands and slain our people. It's time for the Shadow Kingdoms of Valeria to fight back!

Valeria is a rich and wonderful world that you've come to know through Valeria: Card Kingdoms, Villages of Valeria, Quests of Valeria, Corsairs of Valeria, and Margraves of Valeria. Each game is unique and brings new experiences to the gaming space and to the lore of the Valeria Universe. Now it's time to look at the Valeria Universe from a darker perspective. The monsters are fed up with the Humans, Elves and Dwarves encroaching on their lands and slaying their populace. It's time for monster-kind to take back what was once theirs. It's time for the Shadow Kingdoms of Valeria!

What Happens in a Typical Turn?

Each player has a Warden token (Gargoyle, Orc, Goblin, Skeleton, and Gnoll) that begins the game on the Camp location on their player board. The first action on your turn is to move your Warden from its current location to a new location – any one of the five Shadow Shrines shown on the game board.

When you move your Warden to a Shrine, you immediately take one of the several Troop dice located on that Shrine and add it to a Troop position on your player board. Each die shows a Troop Strength, a Troop Type, and a Discount value that will aid you in certain Shrine actions. 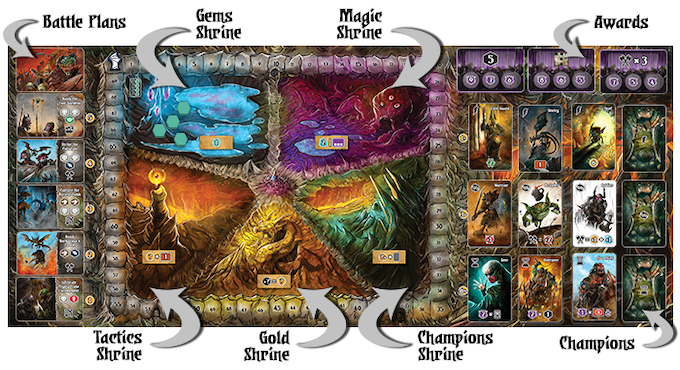 After your Warden has visited several Shrines over a series of turns, you'll have a collection of Troop dice and it will be time to put them to work by completing a Battle Plan. To do this, use your Warden's move to return to the Camp on your player board.

Upgrading Your Player Board

Completing Battle Plans is the chief way of scoring Victory Points, but it also allows you to upgrade your player board to make your game engine more powerful, provide versatile abilities, and the chance to earn bonus Victory Points. 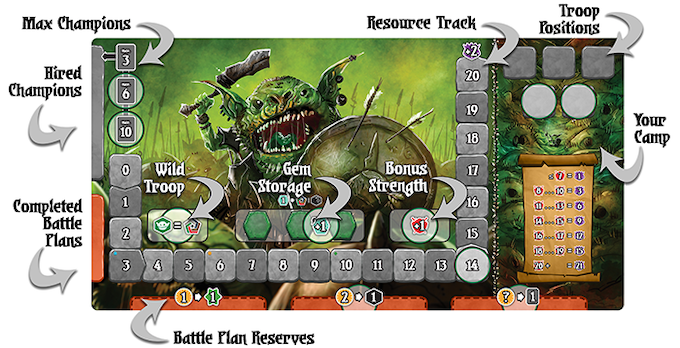 Turns are simple in Shadow Kingdoms of Valeria, but as the game progresses you'll find exciting complexity nestled within your decisions, making every game more interesting than the last.

The choice is yours!

Module #1: Shrine of the Titans

This is a 6th Shrine that occupies the cavern at the center of the game board. After each battle, you will place your highest value Troop die into the Shrine of the Titans.

The Shrine can hold a number of Troop dice equal to the number of players. On your turn, you can move your Warden token to the Shrine of the Titans and buy up to 3 dice...if you have enough Gold. This module also includes 5 additional Troop dice. 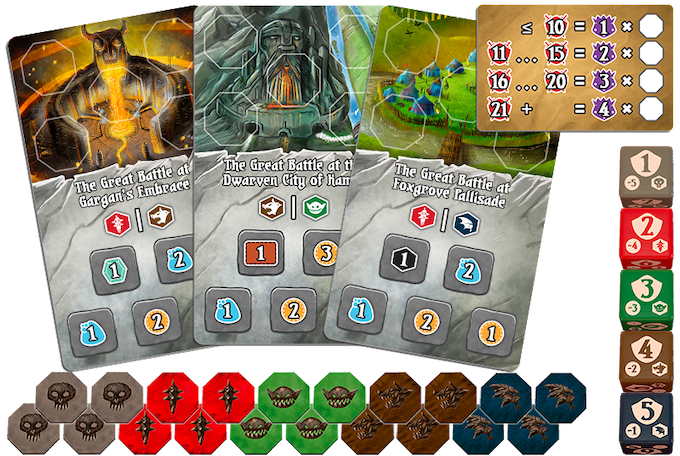 When all 5 Troop positions are filled on a Great Battle, the card is resolved and each Participation marker on that card earns you a share of the Victory Points for that Great Battle. This module also includes 20 Participation Markers and 5 additional Troop dice.

This is a set of 28 cards (44x68mm) with 2 of 6 unique and powerful actions spread throughout the cards in every possible combination. During setup, shuffle the cards and give 3 to each player.

At any time during your turn, you may play an Ancient Spell card from your hand to perform one of the two available powers. It's important to note that playing an Ancient Spell card is a free action along with your regular action. These spells are meant to augment and boost specific actions, dice, etc.

This is a set of 5 purple custom dice (16mm - same size as the other dice in the game). During setup, just toss the 5 Wraith Dice into the bag along with the usual dice needed for your number of players. Each die has Strength of 1, 1, 2, 2, 3, and 3, (opposite sides always add up to 4) so they are weaker than the regular Troop dice, but this also means that they're more likely to give you better Discounts if you draft them at the Tactics and Champions Shines, and more likely to pay out more gold if you draft them from Gold Shrine.

Wraith dice are considered WILD when completing any Battle Plan. So, even though they're weak, they can be any Troop Type you need. Wraith dice are also wild if you put them on a Great Battle card (Module #2). When you draft a Wraith die, it DOES NOT take up a Troop slot on your Player Board! You just set it somewhere on your Camp and use it when you need it most. The flexibility of these new dice will add lots of new play options to your game of Shadow Kingdoms of Valeria. 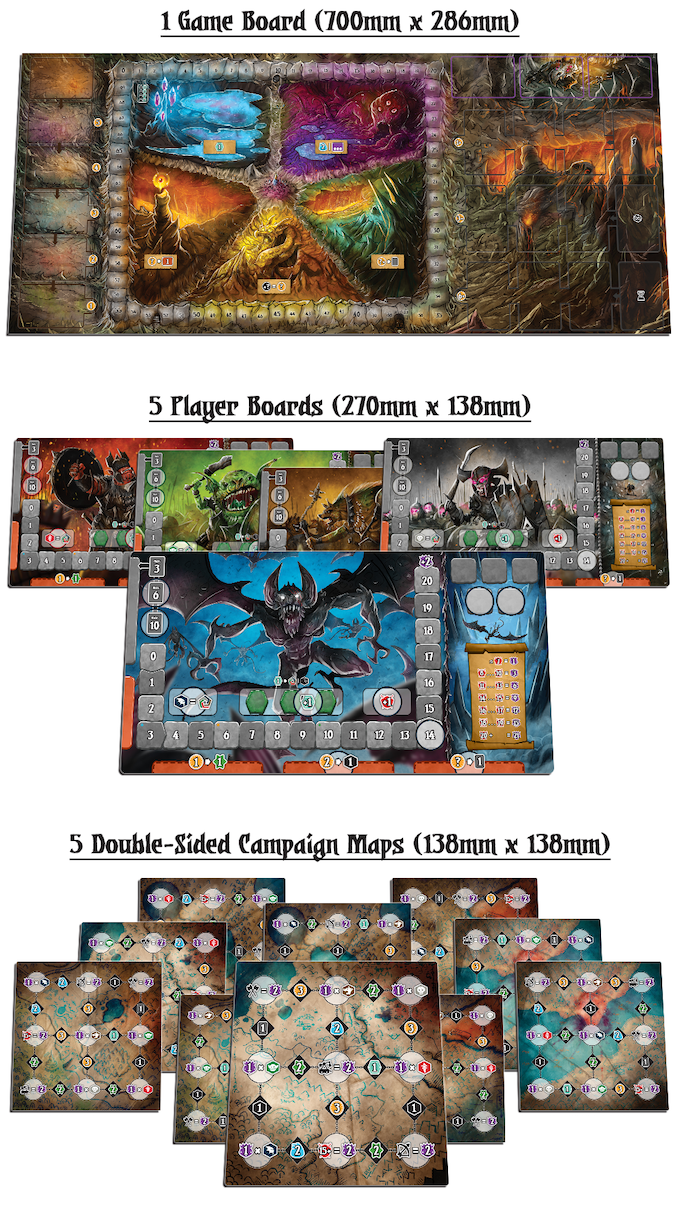 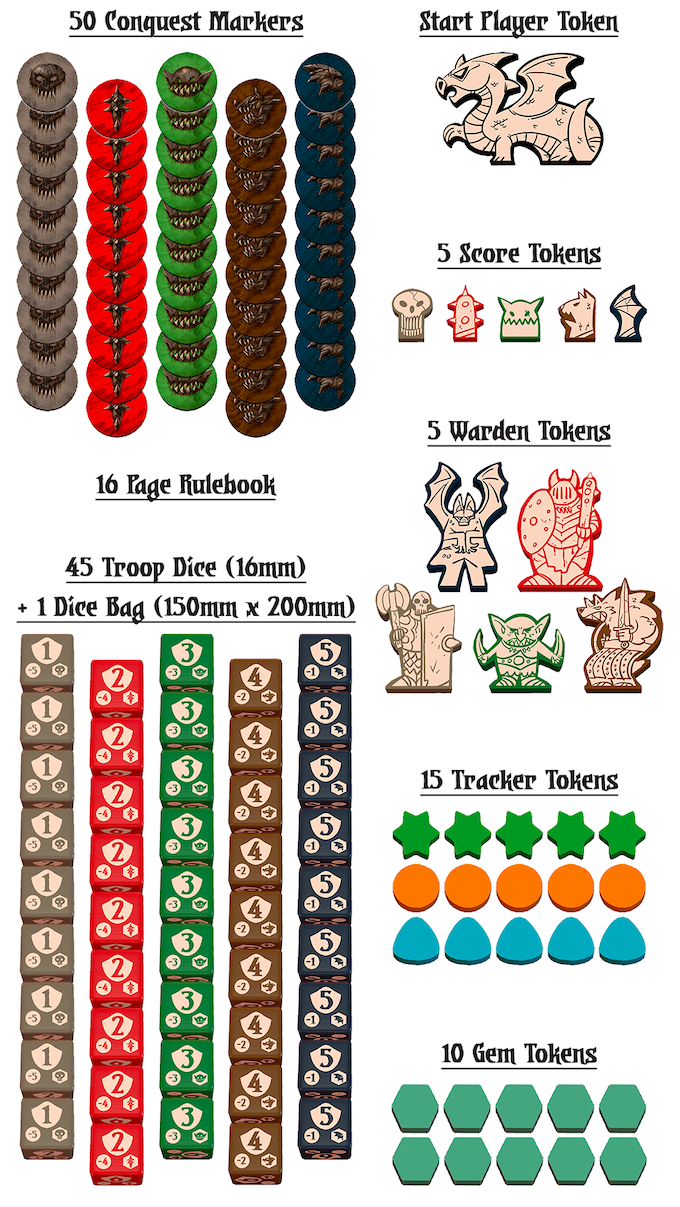 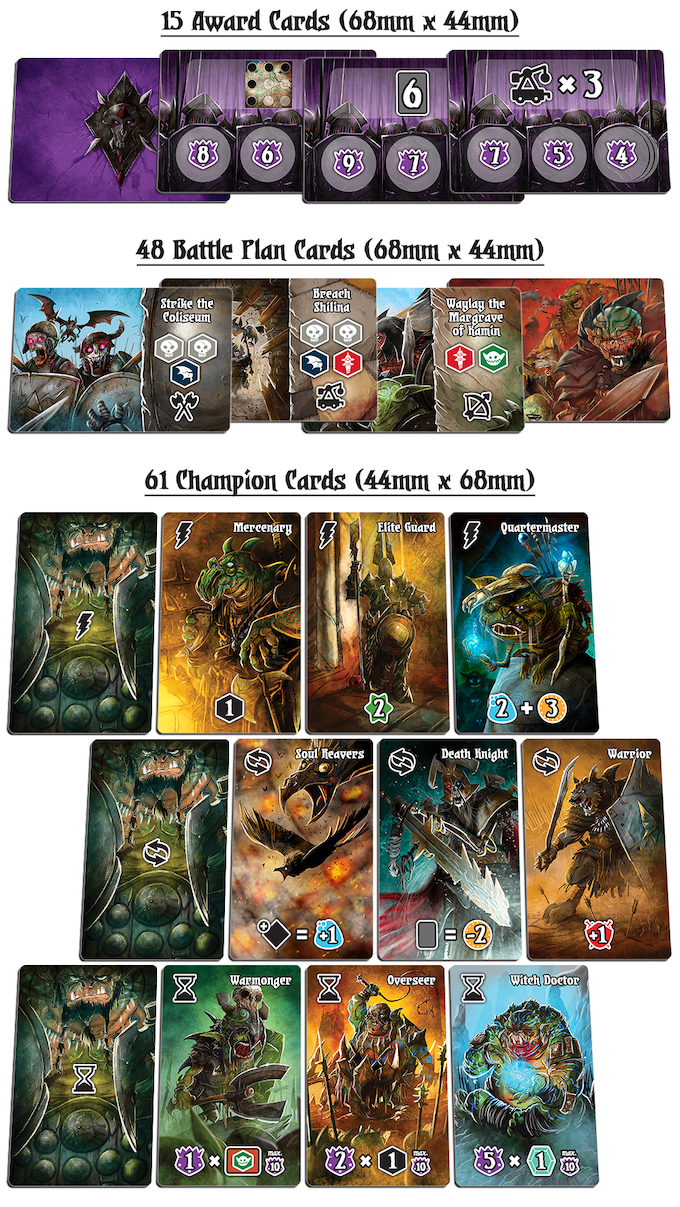 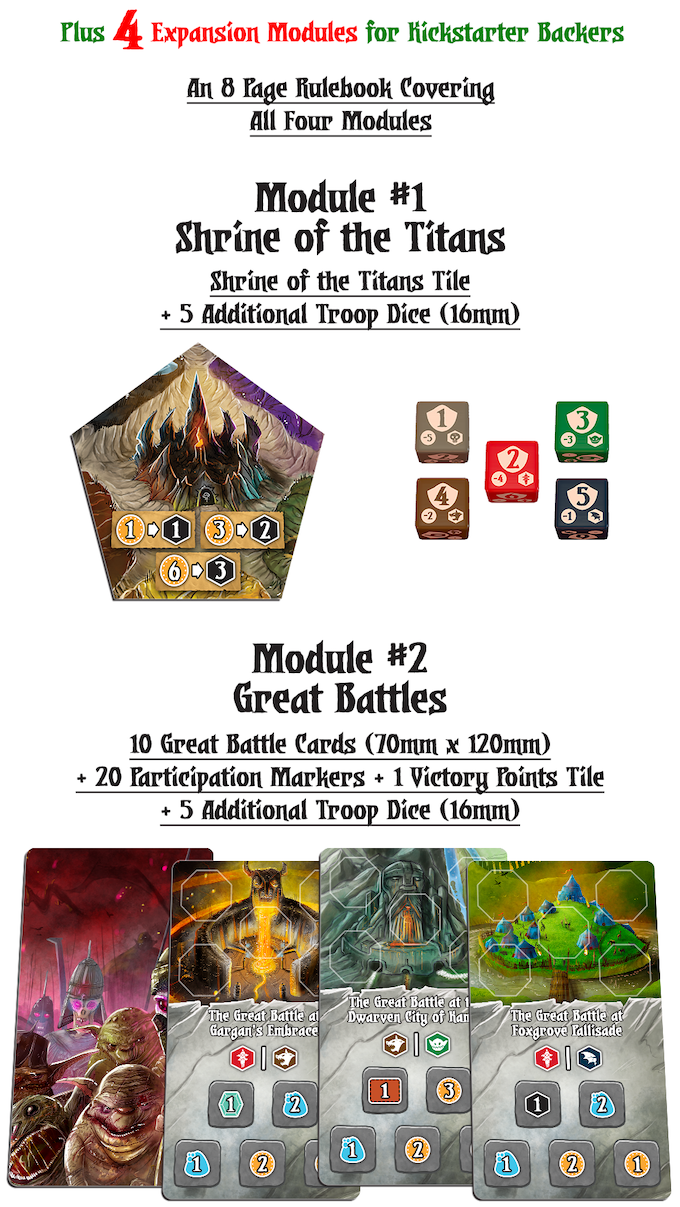 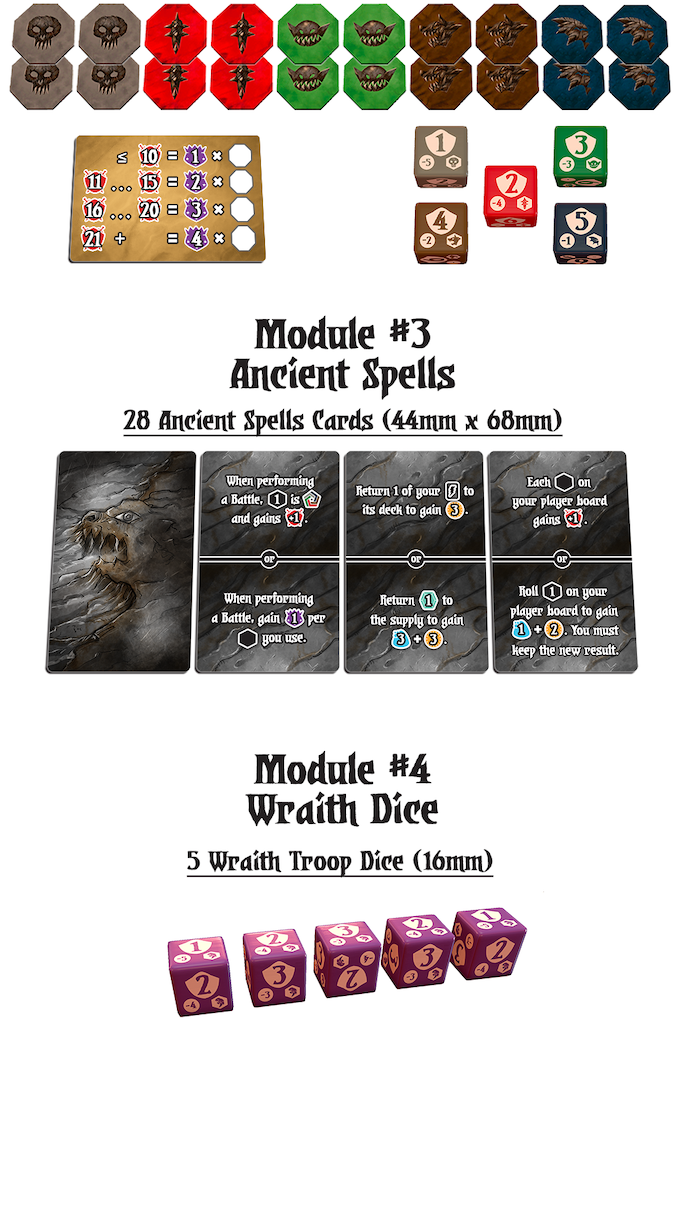