In Rise of Tribes players built villages, discovered pottery and tamed a mammoth - now it's time to take it to the next level with Beasts & Bronze.

Beasts is a deck of new animal-themed events that can be played alone or mixed with the original event deck. Players will face off against crocodiles, cave bears and wolf packs along with other creatures, some helpful and some best avoided.

Bronze provides a new path to victory - complete the tasks to acquire Trade Routes, Metallurgy and Writing and players immediately advance to the Bronze Age, and win! Victory points are so Stone Age.

Beasts & Bronze may be played separately or combine them together along with any of the special terrain, tribal elders, or leader powers from the base game - adding to the array of Rise of Tribes Advanced Play modules available as we step into the future! 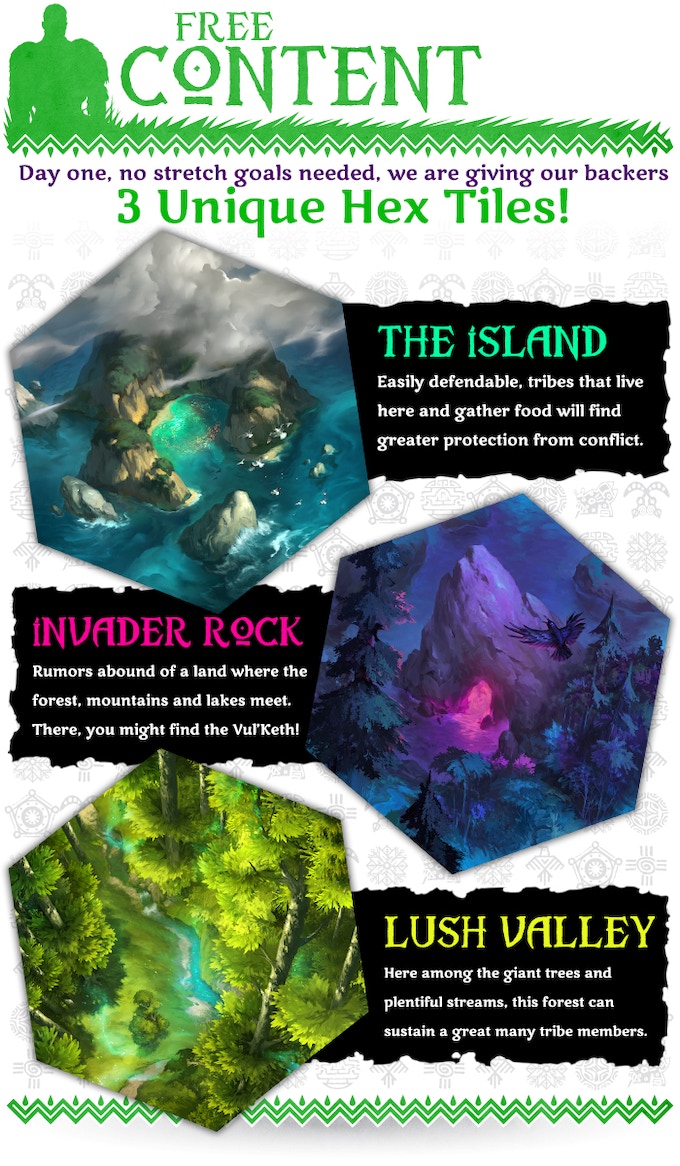 Not only does Beasts & Bronze and The Vul’Keth Invasion all fit in the box, but they also come with a nifty tray that fits the entire Deluxe Upgrade bits inside THAT. It’s Box-ception! … a little known early ancient technology, perfected for this campaign.

The Bronze expansion is a new, competitive win condition useable with all game modes! You’ll receive a Technology card (your choice of Metallurgy, Writing or Trade Routes) when you complete a village. Complete any/all tasks on Technologies to gain developments and a unique power per Technology! The first to finish all three Technologies instantly wins the game, regardless of points!

The best part? Each player can independently decide which path to victory to pursue and even pivot mid game!

The Beasts expansion is an alternate event deck and related custom meeples designed both to immerse you right in the game with unique game set ups and also to enhance the surprises and add new challenges. Beasts mix it up for both victory conditions, and these events can combine with original events in any way your game group prefers!

The mammoth and saber return (with new effects) for everyone to get these classic meeples from the original game!

The Vul’Keth Invasion (solo mode) is designed to give a challenge to the experienced players and capture the same feel as a multi-player game. Your foes take minimal and fast but impactful turns, giving you tons of great decisions that deal with invader goals, all new events and deciding the powers that the opposing Warlords unlock as you play!

The Vul’Keth foe inspired us to create the 9th unique playable tribe. Gain either Seize or Pillage when you play with Leader powers!