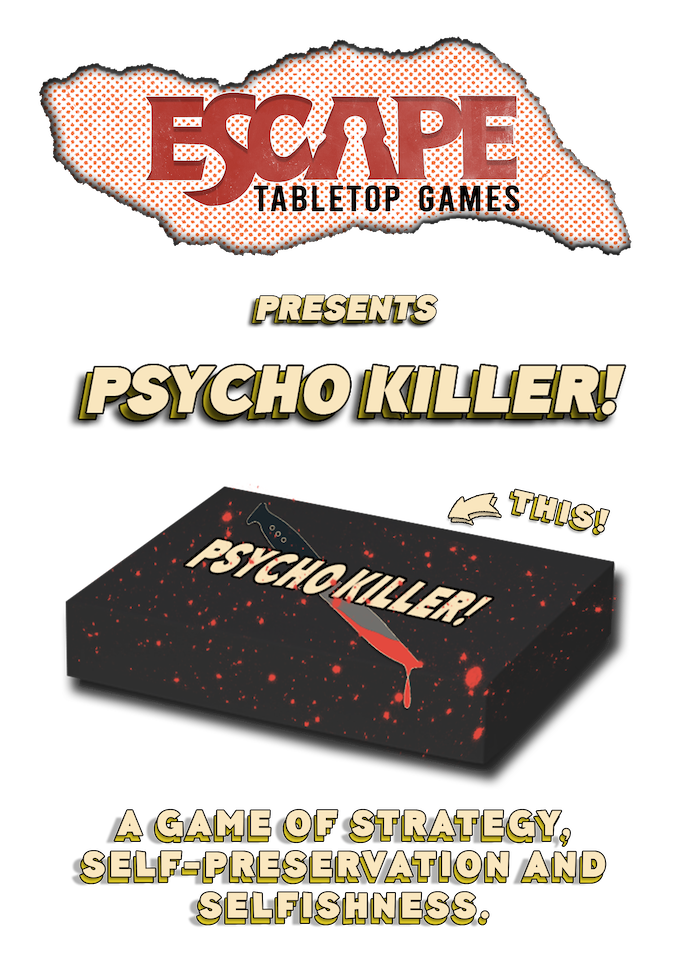 Escape Tabletop Games is a new project from Michael Wilkinson and Mitch Young, the co-creators of Escape Rooms Canberra.

Coming from a background of creating new and exciting things for people to do with friends, and with a bunch of extra time on our hands, it was a no-brainer for us to create something you can play over and over with family and housemates without getting bored (fingers crossed).

Inspired by retro Slasher films and all the fun clichés that come with them, Psycho Killer is a game in the same vein as Exploding Kittens, but with a few more twists and turns.

Designed to be played with 3-5 players, you must evade the Psycho Killer lurking in the deck while also trying to unload the weapons he will use to attack you. Fast paced, strategic and hilarious, Psycho Killer will keep you on your toes and guessing until the very end.

In the deck, there are 5 psycho killers and the weapons he uses to attack you.

Your turn consists of playing as many cards as you like from your hand but must end by you drawing a card from the top of the deck. However, you do not need to play a card to draw from the deck.

If someone draws a Psycho Killer they must play it on the table in front of them, unless they can evade the Psycho Killer. If they cannot, every player with a weapon card in their hand gets attacked.

When attacked, players must place their Weapon cards face up on the table in front of them. These are called Injury Piles.

Each Psycho Killer and Weapon card is worth a certain amount of points. When they are added to your injury pile they become Injury Points. The game ends when the last Psycho Killer is drawn and the player with the lowest amount of injury points wins.

Psycho Killer satirises your favourite retro horror and slasher films. Use every cliche in the book to screw over your friends and survive the Psycho Killer!

WHAT'S IN THE BOX?