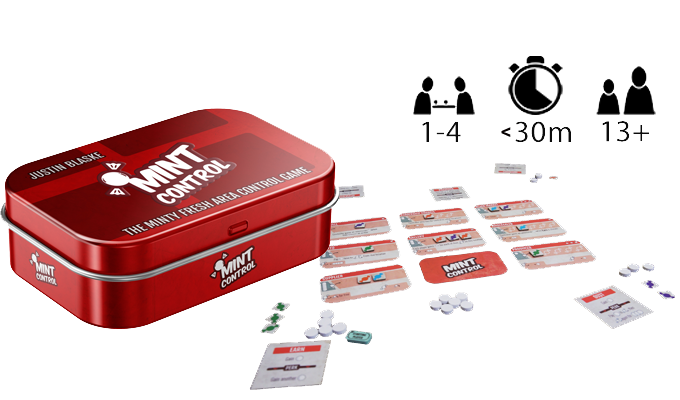 Mint Control is designed to provide a small footprint introduction experience to the Area Control and Action Selection genres of gaming that is fun and rewarding for new and seasoned gamers alike. 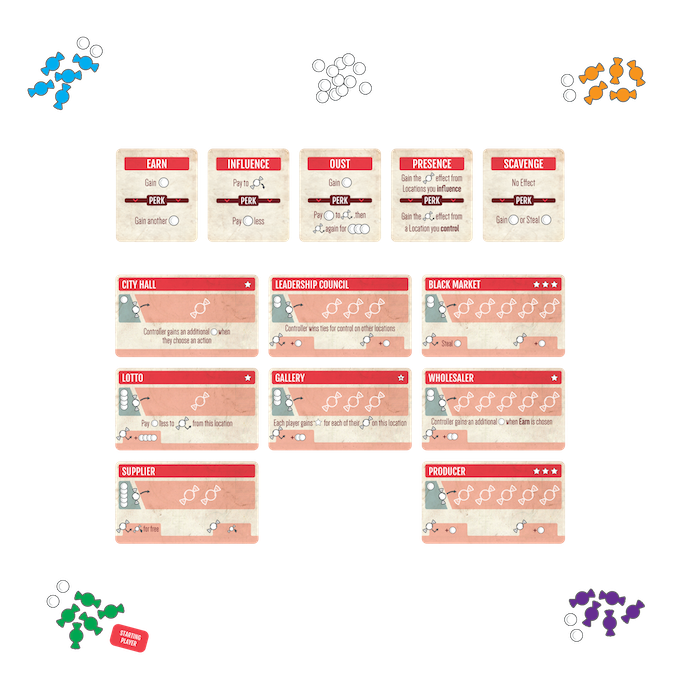 The Influence Action allows players to pay Mints to add an Influence Token to an open Influence space. The Perk for selecting this Action reduces the cost to Influence a Location by 1, to a minimum of 0.

The Earn Action gives players Mints to spend on future turns. The Perk for selecting this Action is to gain an additional Mint.

The Presence Action grants each player the Presence bonus for each Location where they have Influence. The Perk for this Action is gain the eviction bonus from a Location that the player controls.

The Oust Action gains each player one Mint, similar to Earn. However, the perk for Oust is to spend 1 Mint to remove any 1 Influence Token from a Location. Then an additional 3 Mints can be spent to remove a second Influence token from a Location. The second token has no additional restrictions, it can be on the same or a different Location, and the same or a different player.

The Scavenge Action does not provide an Action for all players, only the player that selected it. That player can choose to gain 1 Mint from the Supply, or steal 1 Mint from another player.

The game ends at the end of the Action in which at least one player has all 5 of their influence tokens on Locations.

Players gain points for each Location they control. The player with the most points, wins!

In the event of a tie, the player with the most Mints left over wins.

Then, the tied player that has the most Influence placed on locations wins.

Then, the tied player whose age is closest to 42 wins.